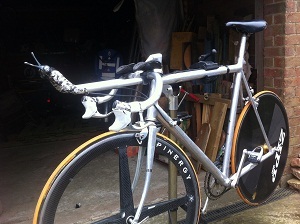 Cycling Time Trials (CTT) is the authoritative body for time trialling in the UK. It has a highly active and forward-looking membership, and this is reflected in its informative and up-to-date website. A handful of events allow online entry; you can filter for these on the main CTT website, or go to the Online Event Entry portal to sign up and enter. (Note that payment is by credit or debit card, and there's a 70p surcharge as a result.) By the way, for thousands of photos of British time triallists going back through the ages, have a browse and search of ttlegends.org.

East District time trials (open events) for 2015 are listed on the CTT website. Go to the CTT 2015 events page and select District:East.

North Norfolk Wheelers club events, starting near Sheringham (on the north coast) and running from late March until early September.

Gt Yarmouth CC club events are at Somerleyton from early May until the end of August.

SpoCo (East) is a TT league that uses the more sporting TT courses.

It's now really easy for you to keep track of your results and enter a time trial.
Just select an event duration below to get started!

This map shows the start points of selected time trial courses. It isn't complete! Please contact me if you'd like to add some in your own region, or if I've made any mistakes.

How to enter a UK time trial

The procedure of entering a cycling time trial in the UK is straightforward, but there are several things you need to know. This guide explains ...

The event has now finished. Weather conditions were good, with light winds and temperatures of 14 - 17 degrees C. I was marshalling at ...

Event cancelled due to a rider being seriously hurt after a collision at the exit of the Snetterton junction, and subsequent closure of the ...

Scattered showers across the region didn't materialise during the event in the Waveney Valley, giving riders warm, overcast weather with just ...

The event went ahead in warm sunshine and a brisk north-easterly wind. Traffic was moderate on the A11 - kind of typical nowadays for a Sunday ...

A fairly fast day despite the 15mph south-westerly wind. At a mild 10 degrees C and with dry roads, riders were able to put the power down ...

A brisk south-easterly breeze blowing across the out-and-back course on the Suffolk border did little to dampen times, especially with sunshine ...

It was a fast afternoon for my club's 10-mile time trial, between Attleborough and Wymondham on the A11. With warm sun and a mild SW breeze ...

Serious heat and sun put paid to many people's hopes in this event, with an astonishing 26 DNFs. Combined with 15 DNS, that reduced the start ...

The GB road championships were in Norfolk for 2019, and I rode over to beautiful West Norfolk to spectate at some of the time trial races going ...

Riders had good conditions for the 30-mile East District Champs, with one person (Lloyd Chapman) averaging more than 30mph and the top 3 times ...

There were a few fast times on this calm evening, but a tough last few miles into a wet, rising headwind put paid to many people's hopes of ...

Mild, sunny conditions with a brisk south-westerly wind blew the early-season cobwebs off the riders' time trial machines. On a revised course ...

This was a great way to start the year for the 20-odd time trialists. A mild northerly wind proved to be great for shelter on the run up and ...

Riders enjoyed a calm and sunny morning of racing on the road between Harleston and Bungay, with only a slight northerly cross-wind to contend ...

My name is John Swindells and I'm a keen recreational cyclist with a preference for long one-day rides. I've also previously dabbled in time trialling and cyclo-cross. See more of what I get up to on Strava!