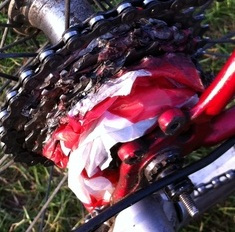 Snow was settled on the ground for the Broome Heath Scramble at Ditchingham, although not as much as in last year's event. Spectators, marshals ...

The cyclo-cross course at Redgrave (near Diss, Suffolk) was very flat and exposed, and a strong breeze made some sections quite a slog. The ...

This was Round 10 of the Eastern Cross League, in warm and sunny conditions with very little breeze. The ground was dry underfoot as well ...

This was round 8 of the Eastern Cyclo-cross League. Conditions were unseasonably warm and sunny, with hardly any wind either. The ground was ...

This was a category B cyclocross event organised by Amis Velo, at Hilly Fields in Colchester (next to the Colchester Institute). Conditions ...

A fairly fast day's racing on the grass plateau and slopes of Hilly Fields in Colchester, helped by dry conditions and mild temperatures. The course did cut up for the laster races, but on the whole it was a decent ride. Results available ... (more)

An overnight forecast of high winds put the event at risk, but these fortunately didn't happen - although it was quite windy in the afternoon. The course was well laid out on grass and some tarmac, although the grass was exceedingly bumpy ... (more)

Leaden skies threatened the organisers, helpers and racers all day at Redgrave, butwe got away with it and enjoyed fairly dry conditions. Not to say that there wasn't any mud: the course is notorious for churned-up grass that saps the legs ... (more)